We know that thought is incoherent, confused, because we think we exist and operate the way we think we do, when in fact, we’re so lacking in self-knowledge and self-awareness that we’re too confused to know who/what we actually are or what we’re actually doing. So what should we call this kind of thinking since it isn’t practical, being based on beliefs, assumptions, presumptions, biases, prejudices, etc., and not facts?

The earliest mention of psychological thought I’ve been able to find on Kinfonet is in June 2020, two by Jack Pine in The Seeds Have Been Sown. It’s not a K quote. But maybe Jack can find a quote for it.

June 2020; Jack Pine: #29 “I also don’t know what you mean by, “…our death, has already happened”. Obviously, for most of us our death hasn’t already happened. K talked about two different “deaths”. The physical body dies and there is a psychological death. Thought operates as both practical and psychological. K talked about dying to our psychological thought. Die to all of our yesterdays. These are memories, experiences, knowledge that form images of who we are, of others and so on. We need practical thought in order to find our way home, do our jobs and to do the countless other things one is required to do to live, to survive. Attachments are part of the psychological thought process, by the way. They don’t stand alone. Without thought there would be no attachments. That’s obvious, right?”

June 2020; Jack Pine #35 “Yes, but this is only true if the self, the center, thought has been dissolved. It’s not automatically true for everyone. For those of us who are still functioning within psychological thought, who are psychological thought, this is not true. We still have a past, present and future.+

Looks like Jack Pine was suspended from Kinfonet in February 2021. 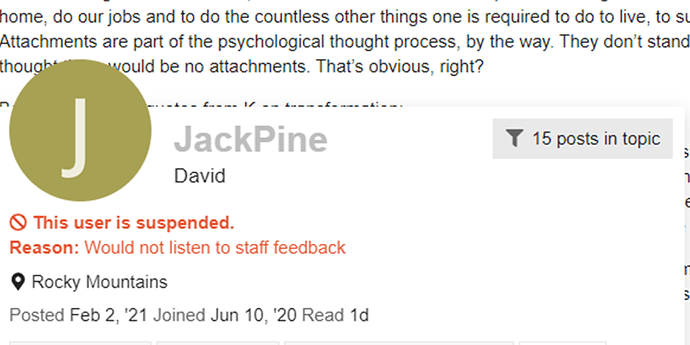 Several used the phrase after JackPine. His use of the phrase was the first I saw on Kinfonet. As far as the JKrishnamurti.org goes as a K quote search engine, this is what they say at the bottom of their homepage: “This website is the official repository of the teachings of J. Krishnamurti, made possible by the Krishnamurti Foundations (KFT, KFA, KFI, FKLA) © 2022 ”

The distinction comes from the fact that we need to access certain bits of data in order to get around and about : peoples names, pin codes, local geography etc

What people are getting upset about I think is knowledge based thought that causes harm? Holding on to thoughts and knowledge despite them obviously being broken, detrimental, causing pain and hassle?

Did Krishnamurti ever use the term “psychological thought”?

I found just two instances on jkrishnamurti.org, which is the most complete Krishnamurti archive I know of. (Anyone know of a more comprehensive one?) Enter this text string in Google:

Could we say that psychological thought is any and all thought that is influenced by the feeling-belief that we are (identify with) a psyche or egoic self? That influence might be pronounced or very very subtle. Looking at it this way, almost all our thinking is psychological to some degree.

he feeling-belief that we are (identify with) a psyche or egoic self?

This “identify with” thingy is the main culprit it seems - thats how thought/concepts etc become sticky, more truthful than it needs to be for pure practicality.

Rick, What were those two instances, exactly? I’ve been searching, and couldn’t find one. Please leave quote and link.

Did Krishnamurti ever use the term “psychological thought”?

In the conversations with Bohm both those one in 1975 and the ones in the Ending of Time, David frequently asks him when Krishnaji uses “thought,” you mean “psychological?” which he then confirms.

One could argue that he assumes that we are capable of understanding that he is always talking about the psychological aspect of thought and not the practical.

But yes we can nitpick about many things why not about this.

Death is a state when the mind has lost its recognition of itself as consciousness and of the borders of time. Where there is continuity of thought - which is what most of us want, which is all that we know - it breeds sorrow, anxiety, guilt and all the travail of life; that thought has a continuity of its own, but thought is bound by time. When thought dies to itself, when the machinery of memory as thought comes to an end - it is psychological thought, not the mechanical thought of knowledge - then you will find that the thing that you are afraid of is not there. Fear ceases altogether. Then you are living completely, integrally, wholly, from moment to moment; and that is creation.

If I may, I am going to talk about death this evening; but before we go into that immense question, I think we ought to understand the capacity to investigate, the capacity to enquire, to find out, because that is very important in the understanding...

B: Yes, now why is the mind bound up? Let’s see exactly what’s holding the mind.
K: Accumulation.
B: Yes, but I meant that’s going in a circle. Why does the mind continue to accumulate?
K: I think that is fairly clear because in accumulation there is safety, there is security - apparent security.
B: I think that needs a little discussion - you see, in a certain area that is even true, that the accumulation of physical food may provide a certain kind of security.
K: Of course, of course.
B: And then since no distinction was made between the outer and the inner, there was the feeling that one could accumulate inwardly either experiences or some knowledge of what to do.
K: Are we saying the outward necessity of physical accumulation for security is necessary?
B: Yes.
K: And that same movement, same idea, same urge moves into the field of psychological thought.
B: Yes.
K: There you accumulate hoping to be secure.
B: Yes, inwardly hoping you can accumulate present memories, or …
K: Yes, all that.
B: … relationships, or …
K: Yes.
B: …things you could count on, principles you could count on.
K: So accumulation, psychological accumulation is safety, protection, security.
B: The illusion, anyway.
K: All right, the illusion of security and in this illusion it has lived.
B: Yes, so it does seem that the first mistake was that man never understood the distinction between what he has to do outside and what he has to do inside, right?
K: Yes, we said that. It is the same movement, outer and inner.

The intelligence of love | J. Krishnamurti

Krishnamurti: This is a dialogue which we have had in Ojai, California. There we had eight dialogues between Dr Bohm and myself, and two here, and one the day before yesterday. So may we continue with that dialogue. Should anybody join this or not at...

Do you agree that most of our thought is influenced to some degree by this identification? Even what might be seen as practical or mechanical thought, for example, things like names, shopping lists, engineering plans for skyscrapers, these are often flavored by ego.

DeNiro couldn’t find any instance of K using the term “psychological thought” in the search of everything he said, but here you show Bohm using the term and K agreeing to its accuracy. But did K ever use the term in his talks, or only with Bohm?

K talked constantly about the ending of thought, which I always found misleading because we can’t function without thought, and what needs to end is psychological thought, which makes us dysfunctional.

One could argue that he assumes that we are capable of understanding that he is always talking about the psychological aspect of thought and not the practical.

Yes, but if one was not inclined to assume things, one could argue that if K had not dialogued with Bohm, we’d never know that there are two distinctly different kinds of thought, one of which is the cause of our confusion and dysfunctional behavior. These two different kinds of thought are virtually indistinguishable because the two are fused, which means the conditioned brain is confused.

Are you open to the possibility that you are confused, or do you assume you are not?

Thank you so much, Rick. So good to see K used the phrase “psychological thought”.

Do you agree that most of our thought is influenced to some degree by this identification?

A problem that many of us have is guilt trips about the thoughts that we are having. The idea being that since I am thinking bad thoughts, that must mean that I am a bad person.
This also works for being a clever (or good etc) person, but this is usually not seen as a problem

And would you agree that most of our thought is influenced, consciously or unconsciously, by the presence of the ego-I? To me it seems like there is some degree of identification with ego, some sense of I-ness pretty much all the time. It’s woven into the very fabric of how we exist.

To me it seems like there is some degree of identification with ego, some sense of I-ness pretty much all the time. It’s woven into the very fabric of how we exist.

K: Please follow this. For us thought is very important; that is the only instrument we have. Thought is the response of memory which has been accumulated through experience, through knowledge, through tradition; and memory is the result of time, inherited from the animal. And with this background we react. This reaction is thinking. Thought is essential at certain levels. But when thought projects itself as the future and the past psychologically, then thought creates fear as well as pleasure; and in this process the mind is made dull and, therefore, inaction is inevitable. Sir, fear, as we said, is brought about by thought - thinking about losing my job, thinking my wife might run away with somebody, thinking about death, thinking about what has been and so on. Can thought stop thinking about the past psychologically, self-protectively, or about the future?

K.Thought is essential at certain levels. But when thought projects itself as the future and the past psychologically, then thought creates fear as well as pleasure; and in this process the mind is made dull and, therefore, inaction is inevitable.

Why does this “process” make the mind “dull”?
And what is “inaction” in this case?