Any clues as to the two variations of this
identical photo of Krishnamurti from
around 1900? 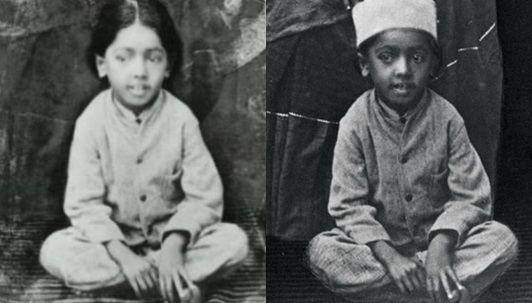 The kid on the right seems to be a bit chubbier.

Both photos are a perfect match. You can place one over the other and everything lines up…the position of the hands, the folds in the garments. But the photo on the right has him wearing some sort of hat. It was obviously edited into the photo at a later time. Can anybody explain the reason for doing this?

I would guess it has something to do with the reason why people always wore a hat during the turn of the 20th century. It was deemed ‘proper’.

There isn’t a fraction of an inch difference in the position of Krishnamurti from the first to the second photo. I suspect the hat was drawn into the photo for some unexplained reason.

If the hat was added, why was the skin darkened?

This is a boy of 5 or 6 years of age? Krishnamurti was born in 1895, Leadbeater didn’t meet him until 1909? so what was the reason for the photograph? Cameras would have been a rare thing in India at that time.

My analysis of the photos is that whereas the hat on the child right looks slightly awkward, the curtain in that image is the more authentic and ends short of the edge of the photo. The curtain in the left hand image has been photoshopped and you can see the effect of the overlay filter on the curtain on the carpet at the right edge.

The facial modelling as per the light is completely different on the child at right, and this cannot be duplicated by copying the left hand image and overlaying it on itself using a multiply filter, similar to stopping down in a camera and darkening the exposure. This leads me to conclude that the right hand image is the authentic one, and the features have been lightened on the child on the left and the background at right pasted in.

Edit: On closer inspection the hair parting on the child in the left hand image looks unnatural, and it seems apparent the top area of the head has been contrived at, so I would say the hat, possibly a cultural identifier? has been removed in the left image, and not added in the right. A higher resolution of the ‘original’ right hand image would doubtless show what everything looked like originally.

Thank you, Dominic. Brilliant sleuthing.
And you may be correct, because I just came across the following photo from https://thelifeofkrishnamurti.kfa.org/timeline/timeline-1895-1899/
This is the full photo. This is Krishnamurti with his mother Sanjeevama. 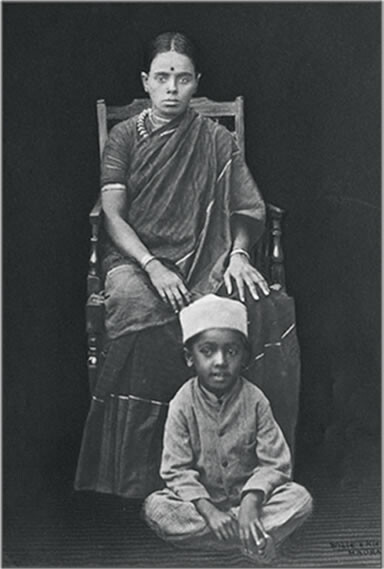 image384×569 36.8 KB
It remains a mystery as to why the hat may have been edited out of the other photo, or added to the second. As you surmised…"it seems apparent the top area of the head has been contrived at, so I would say the hat, possibly a cultural identifier? has been removed in the left image, and not added in the right."

Wikipedia has interesting information on the subject.
The hat resembles what is known as the “Gandhi cap”, which is white and comes to a point in the front over the forehead. The hat was popularized by Gandhi and later by Nehru. However, it did not appear until around 1920, so most likely it would not have existed in 1900.

However, the one caveat I have is that in Mary Lutyens book “Krishnamurti The Years of Fulfilment”, Lutyens has the following photo side by side. If you look closely Sanjeevama’s fingers are not covered by the hat as they are in the top photo. So it seems the hat may have been added after all. 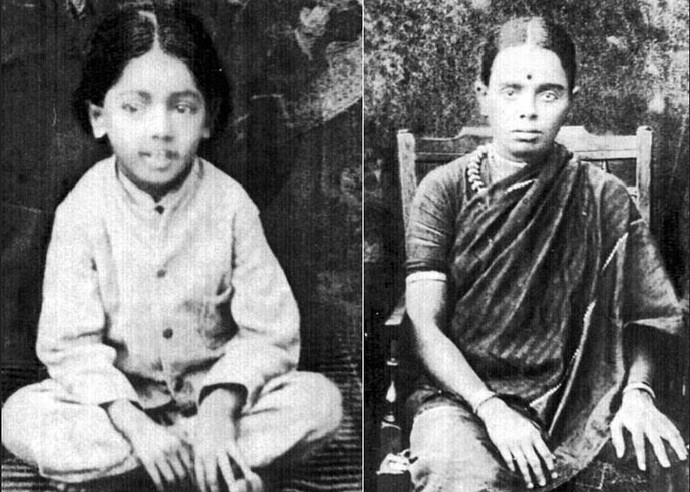 Here are the two photos superimposed… 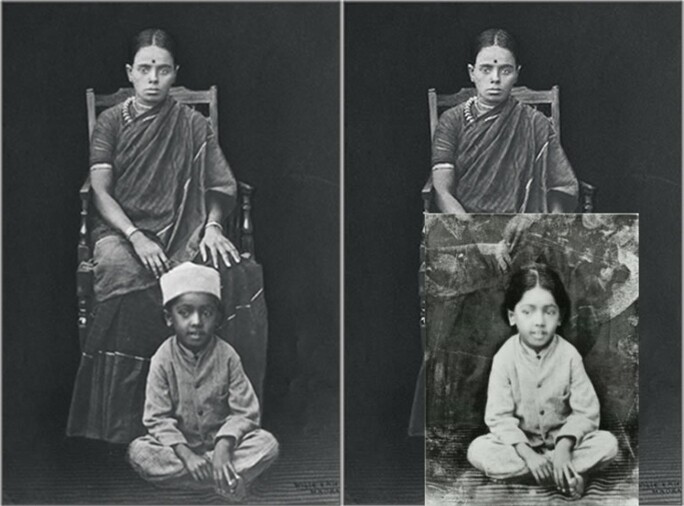 This is the full photo. This is Krishnamurti with his mother Sanjeevama

Ken I sense at this point we may need independent verifiable proof that this is in fact Krishnamurti with his mother, and not something which has been historically misidentified by one and all.

These are the facts I am given to understand. He was born in Madanapalle and moved with the family to Cudappah in 1903, and the mother died there in 1905. Both these places are a long way from the then Madras where Wiele & Klein, two German photographers had their photographic studio, with another at Ootacamund.

What I had originally thought were curtains, is in fact the mother’s dress, and that is still discernible on the left of the child, in the lightened photograph, but with a poorly executed fill into to the righthand side of the child as you look at the photo. One of the hardest things to get correct in any photo alteration is light. The modelling created by the light, presumably natural and/or basic studio flash, in the original photo with the hat, appears authentic. The lightened version would have required a strong light from the front, which would have been uniform, and lit the whole of the head, with hair on top, in the same fashion. So the photography without the hat looks as if it has been severely doctored.

The original studio photograph would have been taken at that time with a old school camera on a tripod, exposing a glass plate negative, with the subject staying very still, while the photographer took the lens cap off for several seconds to expose the plate, and then replaced it, possibly with a flash bang wallop flash into the bargain, but you would not get that blanched look on the photo with no hat, but still with the very dark hair on the top at the sides.

I think the original studio image must form part of a known archive possibly saved for posterity with some institution, and if you could track down the original plate, it would tell you who the subject was.

This is a fascinating mystery.

@Ken
This could possibly trace back to Leadbeater & Co at the Theosophical compound in Madras. If they knew of Wiele & Klein and possibly even used them, and had the run of their studio at one time with the opportunity to look through their back catalogue, they may have found a photograph to help with back filling a story about a new messiah. Otherwise you need a very young Krishnamurti in Madras for a family photo for some reason, in an age where people barely left the district they were born in.