Today I came across a new video of K. which I found very interesting and which says something I never heard before.
It confirmed something I have experimented myself many times, even if not so intensely as K. meant, but which I could not define, be sure of or make any sense of it.
Has anyone had this same experience?

"…attentive during the day, then at night when it goes to sleep what happens?
The mind is completely at rest, …

Q.: Can you remain alert in your sleep?

K.: that’s what I’m trying to get at. The mind then is awake, not asleep.

That’s real attention, which operates during the day.
So sleep, ordinary sleep is inattention.
…then sleep is a state of heightened awakening, wakefulness." 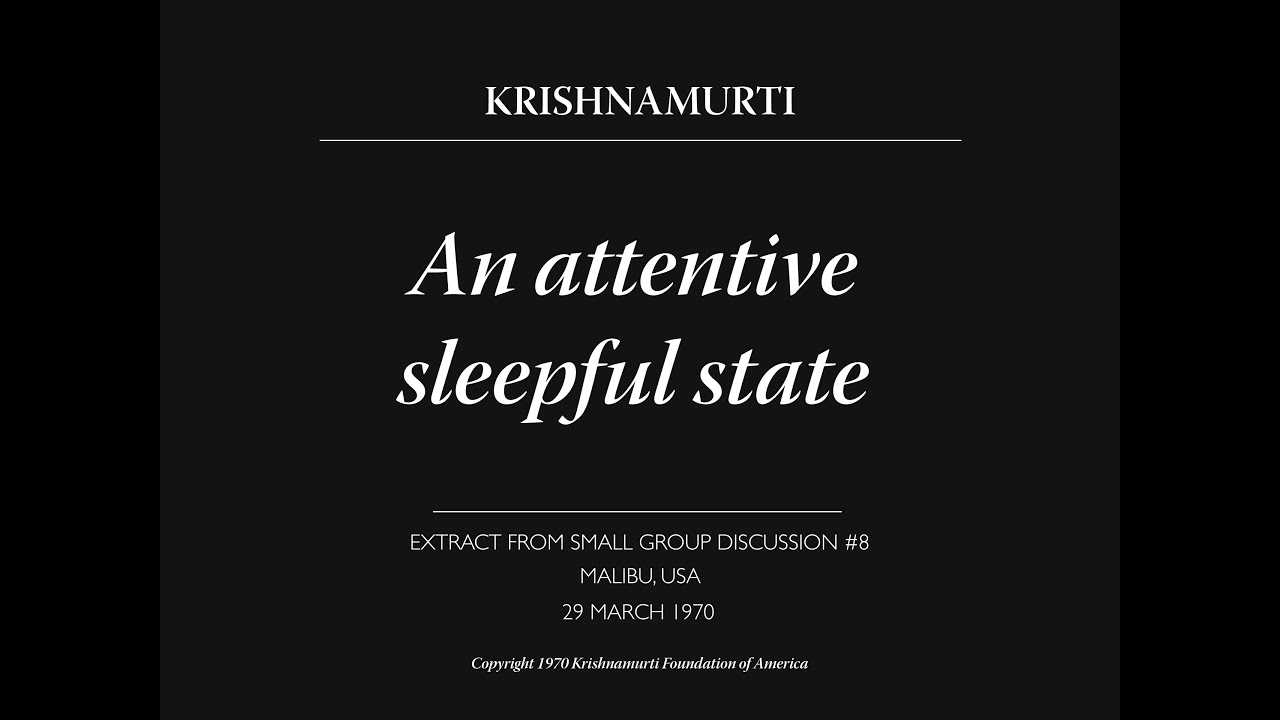 Have you ever been faced with nothing? Not even your own thoughts. This is Order.

Silence in the day can lead to silence when we sleep - which K says is essential.

Effort is inattention - Silence is attention.

I thought that watching the video one could understand what I wanted to share: that attentive sleepful state.

I think I experienced that alertness while sleeping, or just at the moment of awakening, even if I could not say what had taken place. Now listening to K. I realized it was just that.

I remember in a Vipassana meditation retreat I had joined, a friend of mine suddenly stood up from his chair and remained like that for a while with his eyes closed, then he seated again. This scene repeated and went on for the whole meditation time. Then after it was over I approached him and asked the reason of that strange behavior. His answer was: “When meditating I often fall asleep, so to prevent that the moment I feel to be sleepy I stand up in order to stay awake.”

Had he allowed himself to fall asleep he could have discovered something more precious than his compelled wakefulness!

I thought the video showed it was important to understand Order. Not order of arranging things, ideas, etc., in the mind. Not order between an internal state and an external state. Even for the daytime when we are busy, it was an order of a quiet, silent mind. The disorder we have in daily life, all the troubles, concerns, emotions, difficulties, are not accumulated. When there is a mind of this effortless order, it doesn’t need to do anything later about trying to make order when we are tired, and doesn’t need to be working when we are sleeping.

Yes, of course, that is what I have gathered too, and this was not new to me because he talked about “putting the house in order” in all his talks. What was new to me (as far as I can remember) is that sleep can be an attentive state, he even said “this is real attention”. This to me is an important clue and also that one can have attention or awareness without anything to be attentive or aware of. I immediately recolled that I had experimented that state but I had not thought it was “awareness” or attention so I didnt give any importance or value to it. We always give importance to things we can do and neglet what happens to us without our active participation.